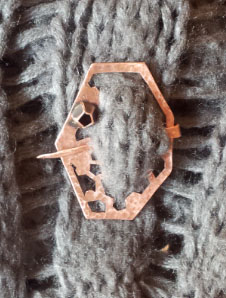 Test piece for a commission – using plaster of paris to hold intricate structures together for soldering, and making a twist-brooch for the first time. I think it would look better with two more barnacles of different sizes. 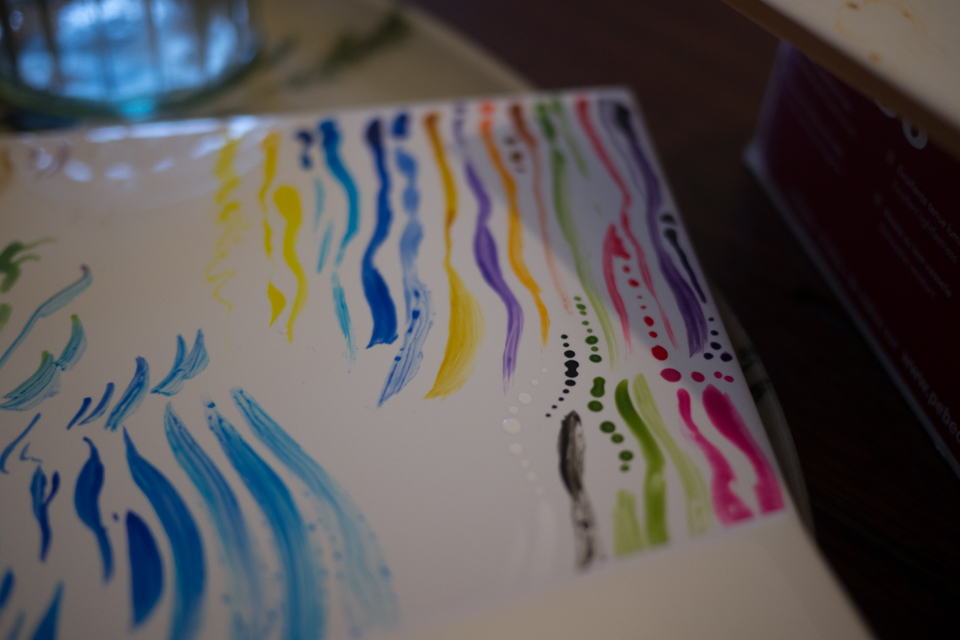 A combination of tile paints + brush, ceramic fineliner, and fine-tipped squeezytube outliner designs. A really interesting effect was the way the black marker will bleed into the slightest amount of condensation on the tile… 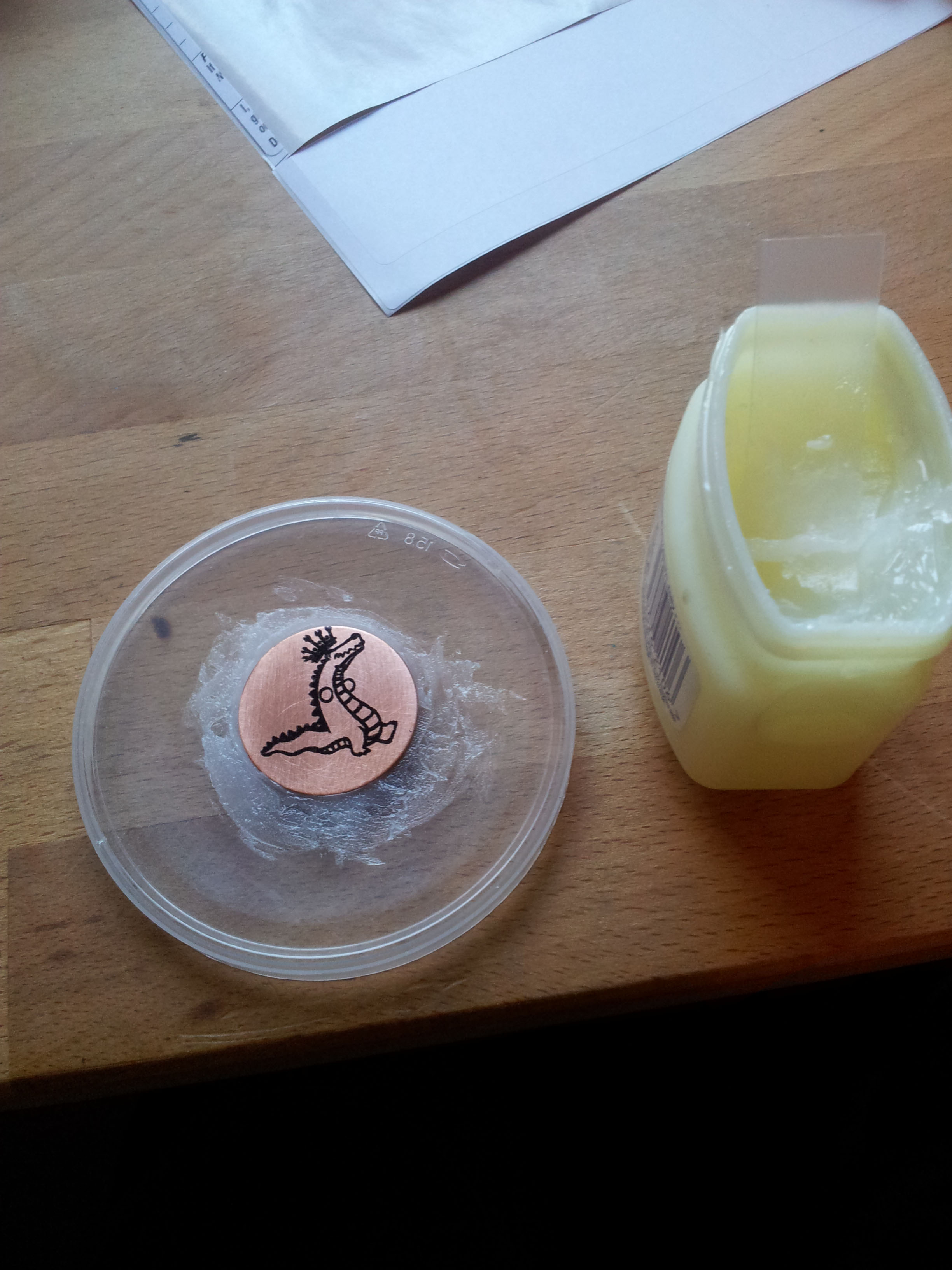 I’ve had a lot of interest in my etched copper jewellery since we published our super-pretty copper etching video, but I wasn’t entirely satisfied with my workflow. I’ve been doing some experiments to improve the issue, and in the past few days I’ve made some great progress!

My first problem was in selecting the material which will form the design, and resist the etchant’s blandishments, leaving bright, smooth, shiny copper behind. Here are a few I’ve tried in the past, and how they’ve let me down:

It’s a struggle to fulfil customers’ expectations when I can’t rely on being able to produce consistently good etches (discarding what falls below my standards!), and I have to laboriously re-draw every detail each time on recalcitrant surfaces with uncooperative materials.

I had read about using laser printer toner – transferring designs from paper to metal using a household iron – and it sounded like the perfect solution.  After my housemate adopted a stray Brother laser printer I performed a variety of unsuccessful experiments with almost every kind of paper I could find in the house, and was just about to bite the bullet and buy expensive specialist paper when I came across a fantastic tip!  The secret: using the left-over backing sheets from Avery laser-printable sticky address labels!  The very thing I’d recently started using for shipping out my jewellery orders!

The next part is the backing.  It’s important to protect the back of whatever you’re etching, so that there’s still something left when you pull it out of the tank.  In the past I’ve coated pieces individually with nail varnish, wax, ink or paint – fiddly, time-consuming and with variable results.  I’ve recently, however, come up with a new batch-making process – coat a small piece of plastic with a thick layer of acrylic paint, drop the copper pieces onto it, and wait for the paint to dry before drawing on the designs with pen and dropping the whole thing into the etching tank.  Effective, but time-consuming, and sometimes a pain to get off the copper pieces afterwards.

But now, I think I have the ultimate solution – vaseline! :D  I use the same general idea, smearing it thickly onto plastic, but now I prepare the design in advance, then smoosh the copper pieces into the vaseline and throw the whole lot straight in the tank.  My tests worked beautifully, with perfect protection of the back, holding the pieces very firmly but releasing them easily (running the whole lot under the cold water even solidified the vaseline, so most of it was left on the plastic), and the clean-up was super easy.

My first test (my Making Tuesdays dancing crocodile logo) transferred beautifully, far better than I could have hoped – not a speck of toner was left behind!  It was tricky to line up the design with the disc, though, so I’ll have to work on that.  The vaseline did its job beautifully, and the whole process was probably the quickest and smoothest etch I’ve ever done!  It was a quickie (1 hour etch) so the design isn’t as deep as it could be, but I’m really happy with the techinques, and will be diving into the rest of my commissions with joy.  (After a few more tests with resolution, detail and alignment…)

There’s no toner left on the scrap of transfer paper!

The toner held its place beautifully.

Scratchy from the scotchbright – needs a bit of a polish.

Not a deep etch, but a good one!

Not bad for a first try!

I was looking at exciting jewellery techniques, tools and benches, and came across this tip that blew my tiny mind…

Using a cone-ended rod to center a sheet with a hole in it within the round of a disc cutter, in order to make perfectly aligned washers! So much easier than lining it up by eye! I’ll definitely be making a tool for this for a batch of earrings I’m planning.

See the photo above and read more about disc cutters over at “Kelsi’s Closet Jewelbox”. 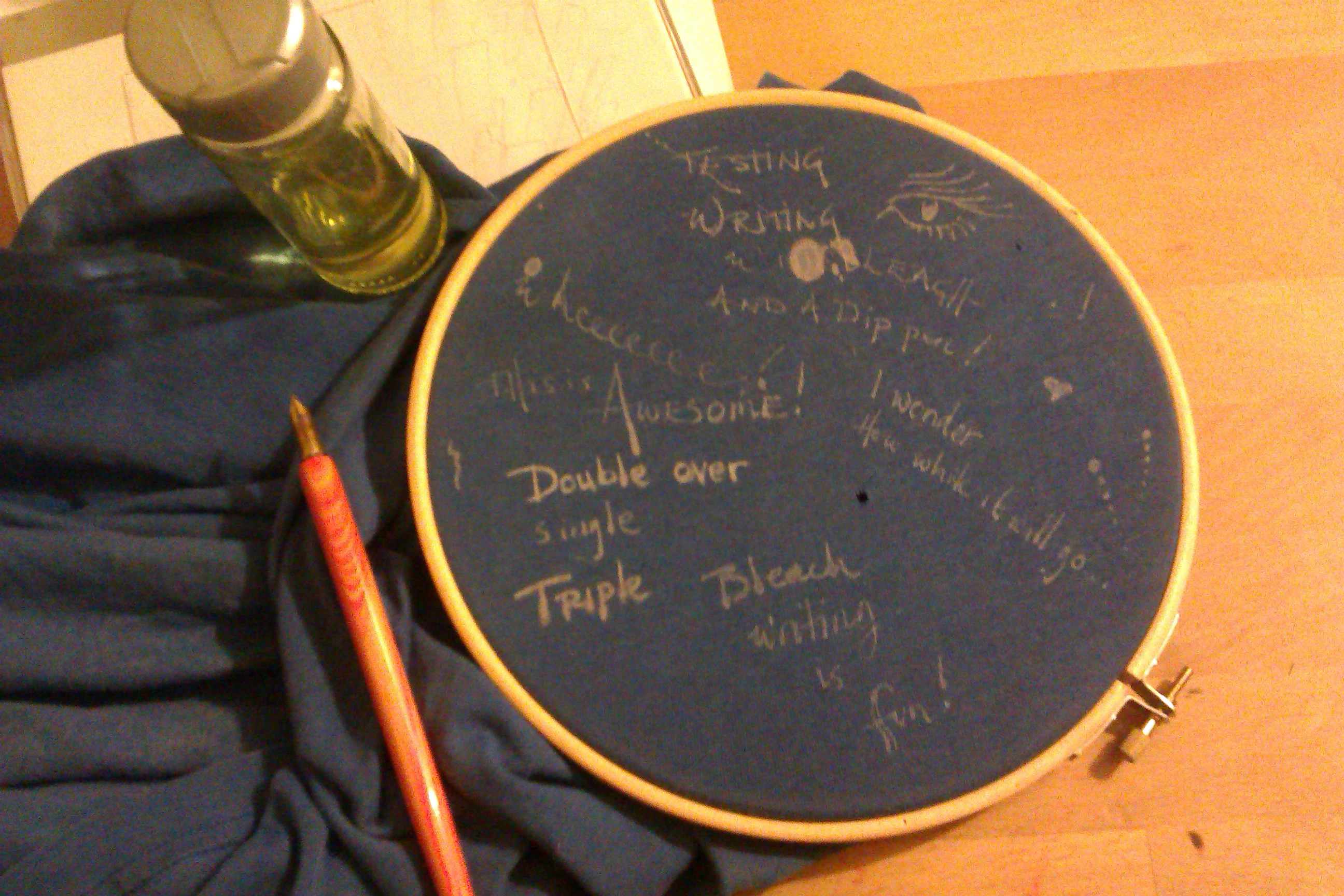 I love drawing tshirts – although I haven’t done many for myself, they’re a staple in my gift repertoire. My most recent venture in that regard though was horribly disappointing – I used goopy light-on-dark dimensional paint, and less than a year later it’s almost completely peeled off the tshirt in question.

I have been very happy with using fabric paints that soak in for dark-on-light illustrations, but now I’m trying using bleach to create light-on-dark patterns. My housemate suggested using a dip pen, and here’s the results so far! On this particular blue tshirt the results are slightly orangey or pinkish, but the detail is great, and I look forward to experimenting further.

This post is a bit of a grab-bag/info dump – I’m rather a stop-motion nerd, and quite a few people have asked me for references for stop-motions etc., so here’s a list of things I use as inspiration or when explaining to people the kind of things that are possible by combining still frames into a video, however those stills were created. It’s by no means comprehensive, but it’s a nice start.

and Behind the Scenes:

The Deep (I love, love, love this, especially the calliper jellyfish
and pincer cleaner-wrasse!):

Western Spaghetti by PES (this guy… just blows my mind):

Game Over by PES (I should probably stop here, just check out their channel):

Food about You (Sciencey elements, nicely surreal approach to
something mundane):

The Pen Story (Similar piece, though with less of a story):

and making of (loads of useful info):
http://www.olympus.eu/PENgiant/

Other techniques:
==============
Knit natural gas commercial (illustrates the usefulness of shooting things in reverse! This was done by unravelling and snipping off the threads for each frame.)

(blue-screen to make things float above a background):

Excellent company at the beach today!

Busy painting up a few coaster orders for Christma

Edit: sorry, sold! I am taking orders for the next

Huge thanks to all the lovely folks whose Dragonfl