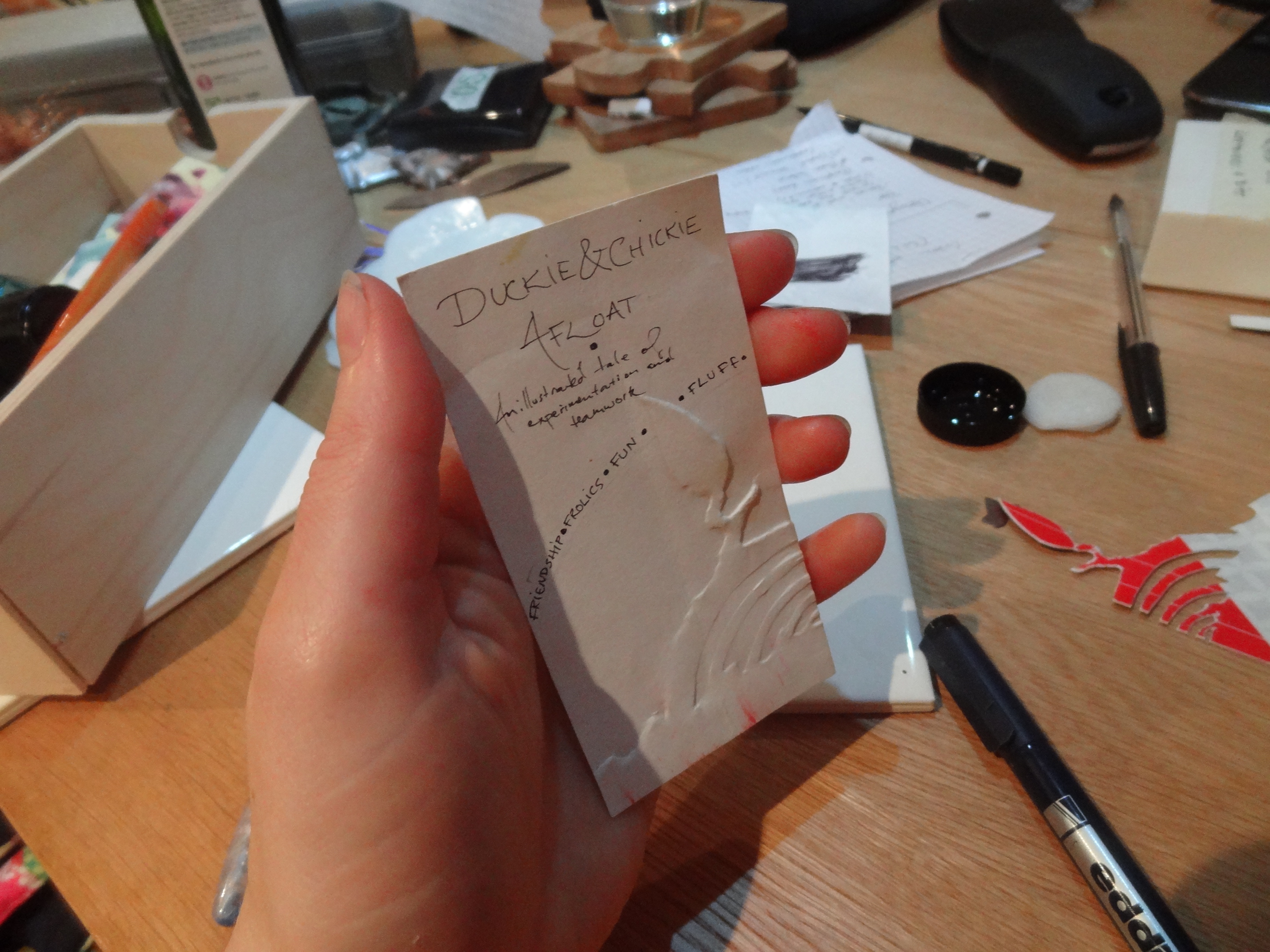 I decided to sit down and figure out how to make an embossing set-up at home. I used my favourite material – a thermoplastic called ‘polymorph’ or ‘friendly plastic’ – something that’s as springy and tough as nylon, but melts at 60 degrees C, in hot water from a kettle.

Previously I’ve followed tutorials for embossing paper using a cardboard stencil and rubbing the back with a rounded tool, as per this tutorial, but it’s fiddly, time consuming and inconsistent. I’ve seen franking machines that use positive and negative aluminium dies, and thought I’d give it a go using things I had laying around. I’ve devised something that gives lovely results, simply, and is very easy to use – just slip the paper into the hinged die, and squeeze.

To test the theory first, I used a cut-out piece of copper sheet as a template and thermoplastic as my die-making material.

Starting with a 0.8mm thick ‘positive’ – an ivy leaf cut from copper sheet.

The two parts of the thermoplastic die are fused by heading and squishing the edges together – nice and springy.

A test sheet, showing how the ivy leaf die works. This is thin card.

Here’s a step-by step breakdown of the process of making a more involved die, suitable for making business cards. I was inspired by one of the images from my book ‘Duckie and Chickie Afloat’. For later versions, I’d like to add registration to site the paper accurately, and also explore multi-level or carved positives to give more intricate embossing.

This is the sheet of packaging plastic I used to make more positives. I think it’s about 1mm thick.

Heating up pellets of thermoplastic in hot water from the kettle. You can’t use plastic containers or it’ll stick.

I placed the plastic template on a ceramic tile, smoothed over a wad of hot thermoplastic, and sandwiched it with another tile before standing carefully on the stack to squash things together.

Separating the tiles reveals the plastic positive is neatly embedded in the thermoplastic.

Holding it up to the light shows the thinner area really nicely – I know it’s rather hard to spot in the photos.

Liberally coating the negative layer with oil (olive was closest) prevents the second layer of thermoplastic from sticking to the first when you push it into the crannies of the design.

This is testing the embossing using some watercolour paper. Slightly dampening the paper made it a lot easier to make the impression.

This is slightly longer than a standard business card but I’m pretty pleased.